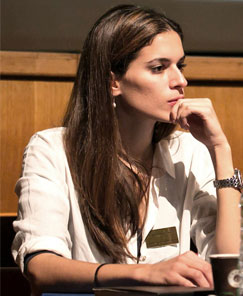 Kalliopi Amygdalou is an architectural historian, currently a Marie Skłodowska-Curie Fellow at the Hellenic Foundation for European and Foreign Policy, carrying out post-doctoral research on the politicisation of architectural heritage in southeastern Europe. Her research project is titled ‘Architectural Replicas in the Scramble for the Past: Politics of Identity in Istanbul, Athens, Skopje’ (REPLICIAS).

Prior to joining ELIAMEP, Kalliopi worked as Lecturer for two years at the School of Architecture of Izmir Institute of Technology in Turkey (2015-2017). She completed her doctoral studies at the Bartlett School of Architecture (U.C.L.) in 2014 with a thesis on the politics of heritage and modernisation in early-20th century Izmir and Thessaloniki. She also holds a M.Sc. in Culture and Society from London School of Economics (2010) and a Diploma in Architecture from the National Technical University of Athens (2009). She speaks Greek, English, Turkish, French and German. Her doctoral studies were funded by the Alexander Onassis Public Benefit Foundation (2011-2014) and the Foundation for Education and European Culture (2010-2011).  Her recent publications include ‘Building the Nation at the Crossroads of ‘East’ and ‘West’: Ernest Hébrard and Henri Prost in the Near East’, Opticon1826 (16): 15, 2014, pp.1-19.

Evangelia Gouda is an undergraduate student in Political Science and Public Administration at the National and Kapodistrian University of Athens (2013-2018). Her academic interests focus on international economic relations, international business and development. She is currently writing her thesis on Interest Groups and Renewable Energy, examining the case of Wind Power in Paros. In 2016 she attended an LSE summer school and completed a full module on ‘Trade, Development and the Environment’. Parallel to her main degree, Evangelia is also studying for a Minor degree in International Business at the American College of Greece with a scholarship from Stavros Niarchos Foundation. At the same time, she is completing her internship at Hellenic Foundation for European and Foreign Policy on the project ‘Architectural Replicas in the Scramble for the Past: Politics of Identity in Istanbul, Athens, Skopje’ (REPLICIAS).